Well-documented code guidelines and standards are absolutely critical for creating consistent, cohesive code together. Especially in the context of creating a design system’s component library, it’s crucial to establish consistent API and code conventions to create an excellent user developers’ experience, as well as to make library extension and maintenance easier.

I created the Frontend Guidelines Questionnaire to get frontend teams on the same page when tackling projects together. 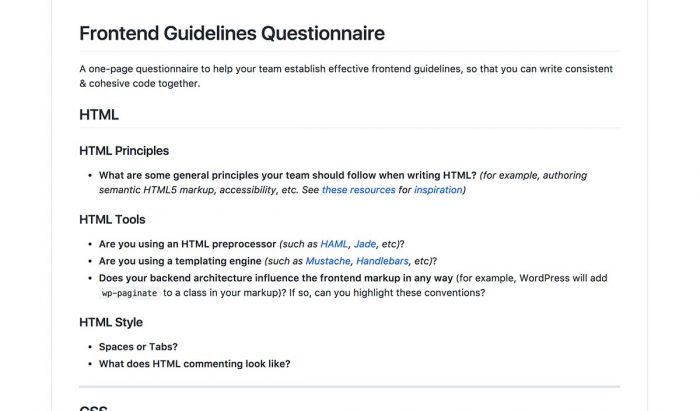 In reality, establishing coding guidelines and standards up front is helpful, but it’s unrealistic you’ll get them exactly perfect on Day 1 of a project. Just like everything else in life, change is a constant.

That’s why rolling code standards are helpful. Here’s how it works:

Here’s a snapshot of our code conventions file for a big design system project we just wrapped up, which contains over 13 modifications to our code guidelines and standards:

Change is inevitable, and your code standards and guidelines should anticipate that. It’s unrealistic to get everything right on Day 1 of the project, but waiting to document code standards until the end of the project won’t help the team and will almost certainly lead to a messy code base.