I switched my default browser on both desktop and mobile to Firefox. It was incredibly painless to do and literally haven’t noticed anything different besides the UI.

My reasons for switching? I’m not entirely sure to be honest. While I care about privacy, I wouldn’t exactly call myself a privacy zealot.

If I had to answer the question “what’s the best app on your phone?” my answer would very likely be “Google Photos“. And I love it for all the reasons that privacy champions freak out about. The ability to search for “tacos” and instantly pull up every photo of a taco I’ve taken in the last 15 years to me is absolutely freaking incredible. I find myself pulling up and sharing old photos of family and friends because it’s so painless to do. In addition to Google Photos, I have a Pixel 3 (which is the best phone I’ve ever owned), Nest products (thermostat, smoke detector, outdoor security cameras), use Gmail, Google Maps, Docs, and other services.

How I think about my relationship with Google is I give them my information in exchange for lots of products and services that make my life a lot better/easier. Do I wish that they didn’t collect as much data as they do? Most definitely. And that’s part of my switch to Firefox.

I found myself pulling up Firefox Focus whenever I needed to search for anything shopping, travel, or baby related. I was getting tired of buying a pair of shoes and then having them following me around the internet for weeks.

In addition to pulling back how much I give to Google, I think Edge’s switch to Chromium definitely played a role here. As a web developer it’s complicated feelings all around. On one hand, hooray, less environments to test! On the other hand, I think (browser/rendering engine/environment/everything else) diversity is super important, and I think that building for diversity is a critical pillar of good web development. Of course that means accounting for present-day diversity, but it also means considering a diverse future no one can anticipate. Switching to Firefox as my default browser is hopefully helping Mozilla survive (and hopefully thrive), and thus helping maintain a healthy browser diversity.

The last reason is that Firefox Dev Tools have added some really slick features, especially for front-of-the-frontend developers like me. Chrome Dev Tools are super powerful, but many features to me feel way over my head or irrelevant to me. Firefox Dev Tools have added really cool CSS-specific features like CSS Grid inspector and telling you why your CSS isn’t being applied. So I think there’s some really great stuff in these tools that will help me to my job better.

I was holding off making the switch because I thought I’d have to do a ton of drudgery in order to get up and running.  But much to my surprise and delight, the switch was entirely painless.

I started with switching my mobile browser on my Pixel 3 by going to Settings > Apps & Notifications > Default Apps > Default browser app. 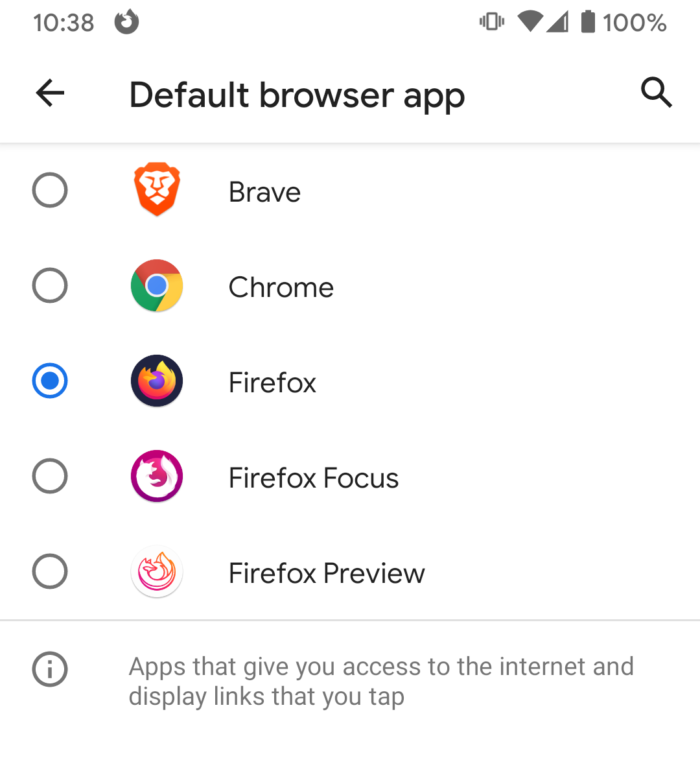 And that’s it! Every link in my email, Twitter, and all other apps open Firefox now. To Android’s credit, the ability to switch the browser and have it behave as a first-class citizen on the OS is really nice. The same can’t be said for iOS, which literally blocks rendering engine diversity and treats non-Apple software as second-class citizens.

Next up was switching my desktop browser. I was in the middle of wrapping up a huge client project so didn’t have time to make the switch, but an inconvenient Chrome freeze forced my hand (the frozen Chrome is still in my dock saying “Application not responding” and force quitting isn’t shaking it haha). Making the switch involved going into Firefox’s preferences and checking the default browser box:

Aside from that, I had to install addons for 1Password and Notion, as well as copy over a bookmarklet or two. Doneski!

In addition to switching my browser, I also changed my default search engine to Duck Duck Go. So far it’s been generally good, but a lot of feedback on Twitter warned that search results weren’t nearly as good as Google. But some good tips came from that feedback, including:

So yah! That’s where I landed. I’m looking forward to sitting with this setup for a while and tweaking things along the way. I’m even giving a little bit of razzle dazzle theme stuff a try.